So Tuesday night was the big event for the “Big 4” and what a night.  First and foremost, leave it to Metallica to do things on such a grand scale. I mean seriously, there’s something about that band and their involvement that takes things to the next level. This was definitely one of those times and one of those things.
The theater I attended was showing the concert on two screens and both were fairly packed. This sort of caught me by surprise, I thought it would be filled, but two theaters were somewhat impressive. If I was in Chicago outright I can see it, but out here yeah, it was a surprise.
I arrived somewhat late, I had things to do that were more important so when I finally got to my seat Anthrax were in full swing. As much shit as I give them (and will continue to give them) I will say they were fairly rokkin’. The very first thing I noticed was Joey Belladonna has aged a whole helluva lot since the reunion disaster of 2005.  Weird, but 5 years on him looks like about 20. Not that I’m fixated on the android looking Belladonna, but kinda hard to ignore when looking at a massive screen.

Vocally he sounded fine. Not great, not horrible just typical Belladonna which is exactly what the band needs right now. It was almost comforting in a way to see Joey up there, he might not be the most technical proficient singer the band has ever had but man, he at least he belongs up there.
I got to see a few songs, “Metal Thrashing Mad” and “I Am The Law,” which were cool. The band was in top form as they should be, right? I mean they’ve been on vacation for what seems like forever, so their attack was pretty sharp. Speaking of sharp, Guitarist Rob Caggiano fits like a glove in the BellaThrax era. I was impressed with his handling of the Spitz stuff and his tone was damn heavy.

Megadeth comes storming out of the gate with “Holy Wars,” and that was very cool! One of their finest songs blasting forth from the epicness of a movie screen was a great way to kick off their set. I will admit to feeling a surge inside when they showed Dave Ellefson holding down the bottom end. You almost forget how long it took him to get back to his home, but like seeing Belladonna with Anthrax, seeing Junior in his rightful place meant a little something to this old fuck.

Their set list was decent, “Hanger 18,” “Headcrusher,” “In My Darkest Hour,” “Hook In Mouth” were all highlights in my book. I’m usually impressed with Mustaine’s shredding skills and tonight was no different. The guy can play his ass off and when matched with the uber talented Chris Broderick it’s a guitar players dream come true. Note for note their precision and techniques were pretty flawless and on the big screen, it kicked some ass for sure.
While I will spew a plenty for his skills on guitar I cannot say the same for his vocals. Simply put, Dave seems to walk the thin line between annoying and passable and while it does little to diminish the feel of the set it leaves a lot to be desired. Still, a good showing for the band and overall a good way to kill 45 minutes or so. 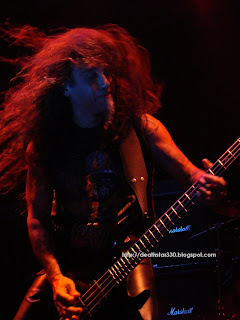 Slayer. Where to begin? It always seems to be a bit strange watching modern Slayer live as they open with new songs that, quite frankly are decent at best. These aren’t just the words of an old man here. Even at the concert site you can feel the life being taken out of the crowd as the climactic intro gives way to an anti-climatic opening song most can live without. Today’s opening dish was the title track of the latest album, “World Painted Blood

.”
I will add that the best things about new Slayer songs are Dave Lombardo. With new Slayer the tempos are similar, the vocals are similar and the riffs are super fucking similar but the man behind the kit keeps the train a moving and move he does. I noticed some new variations to some of the older material as far as the drums are concerned and that was refreshing to hear Dave mix it up a bit.
“War Ensemble” was next and while it’s song I could do without it was delivered with some decent intensity. I’d love to have this song shelved for a few years but I don’t think it’ll happen anytime soon. There were some great moments here too, “Seasons in the Abyss,” “Mandatory Suicide,” “Chemical Warfare,” “Raining Blood” and “Angel of Death” and “South of Heaven” were all top notch entertainment.
It was very, very strange to watch Tom Araya play a set without headbanging. It was always such a part of a Slayer show it really hit me hard. However, while his body has taken some shots, his voice sounded pretty good. Sure the screams are long gone, but he seemed way into it and his adrenaline seemed to carry his voice throughout the show.
Somewhere, maybe between Slayer and Metallica, there was a very respectful tribute to Ronnie James Dio. There were words from Kerry King and then a group interview with Mustaine, Scott Ian and Lars talking about RJD and what he meant to them. It was very cool and very surprising, just a class act on the part of the bands and people involved. 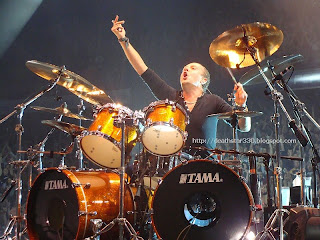 So on to the headliners. Metallica. What can you say? They opened with “Creeping Death” and from there delivered a typical Metallica show. Old stuff (“For Whom the Bell Tolls,” “Fade to Black,” “Harvester of Sorrow”), new stuff (“Cyanide”) and mega hits (“Enter Sandman”, “Master of Puppets,” “Nothing Else Matters”) and more. The band was good; nothing too out of the ordinary as far as production goes, so it was just a typical/stellar Metallica show. What was weird, and this is just me…but watching a Metallica gig in an enormo-dome open air venue is sort of passé these days, no?
After the release of the French

DVD’s watching the band in these settings is nothing too new. Same stage set up, light schemes and massive panning out to show the masses, it was cooler to watch say Slayer or Megadeth working hard to entertain on the massive Metallica stage. I know, nitpicky.
Lastly, and it’s been all the rage since it happened, but it should be! “Am I Evil?” performed by most of the band members who make up ‘TB4,’ it was something special. Metallica aren’t usually known for any type of “We Are the World” type jams, so it was surprising, at least to me. I know the innerweb was a buzz about the jam several hours earlier, but due to my schedule I had no idea and I’m sure made it even more memorable for me. Was it perfect? No but it was cool and it was right.
Well 95% right. For all the props I threw Joey Belladonna’s way earlier? Well he totally fucked up and screwed the pooch when his turn at “Am I Evil?” came. Dude didn’t know the song, dude didn’t know the words, dude didn’t know the vocal patterns, he was basically clueless and it showed. However it’s a slight blemish on a rather historical night in HM.